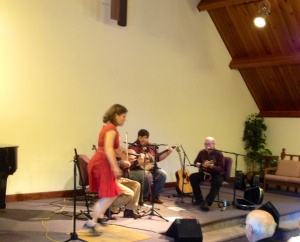 I think of myself as a musician first. I’m a studio guy and teacher because I’m a musician. February 9, 1964 was the day I realized how important music was to me. I was five years old, and a sensational band from England was making their first appearance on the popular TV variety program “The Ed Sullivan Show”. The band was the Beatles, and they were the most amazing thing I had seen or heard. It would take years and some false starts before I really got going playing music, but I knew from that day where I was headed. One of my favorite sayings is “you don’t choose music, it chooses you”.

New Year’s Resolutions aren’t usually my thing, but in January I resolved to see more live music and seek out musicians who are new to me. On a recent weekend I went to three concerts in 3 days and it was good for my soul.

The first show was on a Friday night, singer/songwriter Barbara Cohen at the Bryant Lake Bowl in Minneapolis. I wasn’t at all familiar with her, but was invited by my friends Steve and Kathy and hey, I’m seeking out new music. Bryant Lake is a funky urban nightspot, with a bar, bowling lanes, and a small concert space that seats 150 or so. From what I understand, Barbara Cohen is a Twin Cities native who was in some significant local bands before moving to California a decade ago. She had a recording contract at that time but when her performing career began to sputter, Barbara turned her focus to film soundtrack work. A bike accident resulted in an epiphany that returned her desire to perform, and here she was, back on stage after an 8 year hiatus. The show had rough edges, as Barbara and her quickly assembled trio of backing musicians felt their way through the songs. At one point she consulted with guitarist Jeremy Ylvisaker to confirm the first chord of the next tune, but still the show was joyous, spontaneous, and she sang beautifully. Keep returning to the stage Barbara Cohen. I look forward to seeing you again.

The next afternoon, Sandy and I were at White Bear Lake United Methodist church for a fundraising event called Empty Bowls, to benefit a Native American food shelf. Besides a delicious wild rice soup, Empty Bowls featured a concert by Peter Ostroushko and Dean Magraw. I’ve been playing music regularly at this church for 14 years, and the previous Sunday I had made a big deal of what fabulous musicians these guys are. Perhaps because of this, I was asked to introduce them at the concert. They came on stage, and with hardly a word to each other began a stunning display of musicianship. Peter is simply one of the finest mandolin/fiddle players in the world and Dean a stellar guitarist. They seemed to sense right away the excellent acoustics for their instruments and the quiet attention of the audience. Sometimes on a gig you have to fight your way through a bad room or noisy background. On this day they were free to play with delicacy, finesse, and a wide dynamic range. The thing that struck me most was the level of nonverbal communication between them. Without a set list or a net, one or the other would launch a tune, and a brief look or nod was all they needed to negotiate the arrangements. Between songs we were treated to dry humor and an hour passed quickly watching two masters at work.

Sunday evening found me in a nearby suburb for a show by the Tune Jerks at the Hope Christian Church Concert series. The Hope series just finished it 13th season of presenting concerts ranging from bluegrass to folk, jazz, and beyond. I just found out about it, but this is a great service to the community. Good music at a reasonable price and at intermission, pie and coffee! I think the series is curated by Bob Douglas, and the Tune Jerks are a trio he formed some years ago. The Jerks play old time string band music, Celtic fiddle tunes, and even ragtime and early jazz on various combinations of guitar, fiddle, mandolin, and claw hammer banjo, along with fine singing. They played with relaxed skill and finished each other’s sentences with good humored jabs. Twice during the show they were joined by clogger Julie Young, whose percussive tap dancing was like adding a drummer to the sound.

Three good shows, and I plan to keep getting out to support and be inspired by musicians of all sorts. I also hope to return the favor and move and inspire others when I perform.